Generally speaking the stele statue phenomenon covers a long period of time , beginning at the end of the IV-beginning of the III millennium b.C. and in some cases lasting until the Iron Age .
More than 700 stele statues can be ascribed to this long period , spread over a very large area in Europe that comprises Italy . This area can be taken as beginning in the Caucasus and spreading north of the Black Sea toward Bulgary ( 30 examples in the Caucasus , more or less 50 between Crimea and Moldavia , 170 in  Ukrain , 40 in Bulgary , around 60 in Romany ) then Hungary and all the Alps in Italy and Switzerland , where so far almost 150 stele statues have been discovered . In Germany instead , the 10 odd stele statues discovered probably represent a cultural throwback .
There is a noticeable number of findings in the central mediterranean area : the 63 in Lunigiana , about seventy stele statues in Corsica and Sardinia and thirty in Puglia .  The example found at Vado all’Arancio ( Massa Marittima ) is isolated . Another large group is to be found in the south of France ( 177 stele statues ) , whereas only 8 stele statues have been found in the Paris basin and only 21 in Brittany .
In the Iberian Peninsula around a hundred stele statues have been discovered in the central eastern part of Spain and in Portugal ; these monuments are very different to each other , a fact that reflects the complex intertwining of cultural influences in this region .
A small number belongs to Greece ( one from Soufli Mgoula in Tessaly , a few from the island of Taso ) four from Anatolia , ten from Syria and Irak , whereas only one fragment of a stele statue has so far been discovered at Malta .
The monuments may be classified in four main groups : oriental , alpine , western and central Mediterranean .
To the oriental group belong the stele statues found in Eastern Europe and in Asia Minor : the balcanic -pontic area , greek-anatolic area , Syria , Irak . The majority of these monuments would seem to be male , seeing that they have no breasts . The human figure is well represented , with evident head , face , arms , in some instances legs and anatomical details of the face and chest .  The statues bear weapons like axes and bows and arrows , and also belts , necklaces , tokens representing animals .
It is possible to hypothesize a date only for the statues from the balcanic-pontic area , since these were discovered directly associated with burials belonging to cultures of the ancient and middle Calcolithic ( end of the New Stone Age , beginning of the Eneolithic Age ) , characterized by a nomad , sheep-farming life-style ,usually fortified villages built on hilltops ,and the domestication of horses , often found in the tombs .
In southern Russia (Kazakistan) and in Romania there are statues that could date back to the Iron Age , between the VII and the V century b.C. .

There are two distinct main areas in the alpine group :  a western area - Sion , Aosta , Lunigiana , Provence – and a eastern area – Valcamonica , Valtellina , Trentino-Alto Adige .
In the first of these areas , with the exception of the stele statues in Lunigiana , the statues so far discovered are slab-shaped but clearly anthropomorphic : the head is always represented ( either by the shape of the stone or by engraved anatomical features ) and so usually the arms , and sometimes the collar -bone . The attributes are daggers , bows and arrows , necklaces and belts , eyeglass-shaped pendants in the Aosta-Sion group and daggers , axes , javelins , necklaces and belts in Lunigiana .
Some distinction must be made for the provencal stele statues , because of the very small size ( 20-40 cm high ) and of the iconography , usually confined to the representation of the face , that is often decorated with geometrical  figures .
In the central alpine area iconography is richer and comprises weapons , ornamental objects , symbols , animals , elements of attire like shawls and veils . In this group however , the antropomorphic aspect is never conveyed by anatomical features (Valcamonica ) , but is rather simply suggested or implied through the disposition of attributes and symbols (Valtellina ) . Arms for example , or features of the face or other anatomical elements are never traced . Only the stele statues recently discovered at Arco (Trento) and the one found at Revò (Valle di Non ) have a T-shaped face .
Attributes then , especially weapons , become more important than the anthropomorphic character of the stele statues , in that they express with their repetition and precise disposition on the surface of the stones  a complex ideology that becomes progressively more important as the symbols  become more schematic .
As to chronology , there are associations with archeological findings only for the provencal stele statues that date to the culture called Chassey ( late New Stone Age ) , for the Aosta statues associated with cultural features belonging to the Eneolithic Age , and for the Sion Statues , connected to the Saone Rhone culture ( eneolithic) .
In the case of the other statues , the attributes engraved on the statues allow us to propose an indicative chronology that nearly always confirms an Eneolithic -ancient Bronze Age date .
In the Lunigiana group the tradition carries on well into the iron Age (VII-VI b.C. )

In the western group one can distinguish two areas .
The first comprises the lower Languedoc , Rouergue , the Paris Basin , Brittany in France .  These monuments always have clear anatomical features : face , arms , legs , at times hands and feet , shoulder -blades , in some instances breasts . The attributes are numerous : necklaces , weapons ( axes , daggers , bows and arrows ) , belts , baldrics . In the more elaborate statues even the vertical folds of clothes are traced .
Only some of the stele statues discovered in Languedoc can be associated with archeological contexts : they come from burial sites or from village sites belonging to eneolithic cultures  ( Ferrières and Fontbouisse ) .
Some of the attributes engraved on these monuments have been found in dolmen and in burial caves that have been dated to the end of the New Stone Age and the Eneolithic , and that seem to evolve locally until the beginning of the Bronze Age .  The representations of stele statues traced on the walls of hypogeums or on the pilasters of  dolmen have been dated , as the hypogeums and dolmens themselves , to the Eneolithic Age .
The second area comprises the Iberian Peninsular . Here many anthropomorphic representations have been discovered , even idols and hill-side gravings , but only a small number of stele statues concentrated in the south-western part of Spain and Portugal , mainly near the coast , none of which can be associated to archeological contexts . Both in Spain and Portugal there would not seem to be a recognizable group of stele statues , the ones that have been discovered resemble statues of other groups , especially the provencal ones , or the Sardinian and Middle Eastern idols .  There are clear traces of the influence of the schematic Iberian art .
These comparisons allow a possible dating between the end of the New Stone Age – beginning of the Eneolithic Age and the beginning of the Bronze Age . There are also stele statues that would appear to date back to the Iron Age , VII-VI cen. b.C. , because of the weapons they bear which are typical of this period .
In the central Mediterranean area , groups of stele statues have been found in Puglia , Sardinia and Corsica . In Puglia , at Castelluccio dei Sauri ( Foggia) around thirty stele statues have been discovered ; they are a homogenous group , with similar formal characteristics . There are two main types : female statues with breasts and a parallel groove motif , and statues with weapons (or male ) with triangular shaped daggers , placed in sheaths and hanging from a rather complex looking bandoleer belt .
In Sardinia around thirty stele statues have been so far discovered , along with 40 fragments it is difficult to classify .Some show breasts , others a dagger with two triangular blades with convex edges , that is often associated with an upside-down anthropomorphic motif that has a round head and a trident-shaped body ; others are considered as with no sex , seeing they have no characteristic attributes .
Archeological excavations have allowed to date the stele statues in Puglia to the Eneolithic Age and the Iron Age (the group of statues near Foggia ) and the Sardinian statues to between the Eneolithic and the beginning of the Bronze Age , thanks to their association with funerary monuments near which they were found or in which they were reused .
Comparing the attributes represented on the Corsica stele statues has allowed to date them back to a long period of time that goes from the Eneolithic to the beginning of the Iron Age .
There are also other Iron Age phenomena that are however more difficult to interpret . In many parts of central and northern Italy for example , between the end of the VIII and the end of the VI cen. b.C. there emerges a general trend to produce anthropomorphic monuments , that can however have quite different aspects : the stele statue “a tutto tondo “ , the rectangular stele with decorative motifs engraved on its surface , the framed stele , decorated with engraving or in relief . Monuments of this type appear in Etruria ( especially northern Etruria ) in the Padana Plane ( particularly at Bologna ) but also on the Adriatic coast , at Rimini and in the Piceno ,and also in Veneto ( at Padova ) . 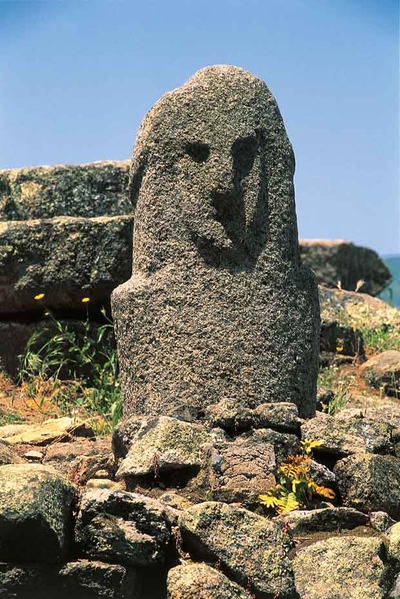