The Lunigiana stele statues that have so far been discovered are not associated with archeological findings , it is therefore rather difficult to date them . On them are graven objects ( weapons , jewelry ) as attributes of the male and female personages . The shape and the characteristics of these objects may be studied to fix a chronology of the stele statues , seeing that it is possible to compare them to objects found in archeological excavations that have been surely dated ; one may assume that the stele statues were made at the time in which the objects graven on them were actually used , that is between the Eneolithic ( groups A and B ) and the Iron ( group C ) Ages .

Whether  stone or  metal weapons , the daggers represented on the stele statues are similar to those found in the Remedello (Brescia ) necropolis , that date between 3400/3300 and 2300/2000 b.C. , that is full Eneolithic Age . This weapon is always shown as horizontal at the belly level , just below the hands , with the point towards the left . In some instances it is associated with an axe .
The group A stele statues have daggers with flat , ogival or triangular blades that sometimes have a ribbing down the middle , and with a cilindrical handle that has a semicircular knob on it :  similar to the central European ones with ogival blade and flat tang of the  Baden civilization .
The group B male stele statues instead have daggers with triangular blades with or without  ribbing down the middle ; the handle has a semicircular knob on the end and this often has rivets . This type of weapon begins to appear in eneolithic contexts , but continues to be present well into the Bronze Age .
The stele statues of Gigliana and Canossa I have a dagger shown inside a rectangular sheath that has ribbing at the sides and in one instance ends with three points ;  the stele statue Filetto IV probably shows an ornamental dagger .

SWORD AND DAGGER WITH SPIKES

The dagger or sword “with spikes “, that only the C group stele statues show , should fix the date of these monuments to the centuries immediately preceding  romanization ( to the last Hallstatt period or to II or III of La Tene ) . The most ancient one would seem to be that shown on the Lerici stele , that could be classified along with the Hallstatt iron swords with spikes of the type “ with a cilindrical handle “ and dated beween the end of the VII and the middle of the VI cen. b.C. . More recent examples are those of the Filetto I and II stele statues , with curved points , that dates back to the middle of the VI cen. b.C. .
The sword is often shown as hanging from a belt and in a sheath ; in one instance – the Lerici stele statue – it hangs from a baldric round the neck .

Totally absent on the stele statues of group A , axes are usually engraved on those belonging to group B : the blade is rectangular and flat , connected to the handle at right angle or at acute angle , almost like a boomerang , and the weapon is representative of an archaic type dating to the Eneolithic Age . It is usually associated with daggers and is shown upright against the chest with the blade to the left .
These axes resemble findings coming from excavations such as Remedello , Spilamberto and some caves in Versilia and near Pisa and that would appear to date from the beginning of the Eneolithic Age , around 3300 b.C. . A similar weapon was found in 1991 with the Similaun mummy .
The axes visible on all the stele statues of group C , with the exception of Campoli and Lerici , have a large square blade fixed to an often curved handle ( Bigliolo , Filetto I , Filetto II , Reusa ) . The blade can be fixed starting from the  very top of the handle or slightly lower down . These weapons probably resemble iron axes found in contexts in central Italy dating to between the VII and the VI cen.b.C. .

Javelins are present only on the stele statues of group C , and are usually engraved in couples and held in a hand , but, seeing they are represented in a generic fashion it’s rather difficult to find some reference to a particular type . This weapon could be entirely fashioned out of iron ( there are archeological findings in the celtiberic area , Haute-Pyrenées for example ) or made out of wood with an iron point ( as in the etruscan-italic area or the middle-adriatic area ) . In necropolis in Lunigiana dating back to the second Iron Age , javelin points are quite frequent , and obviously point to the use of wooden shafts .
There are javelins on the stele statues of Campoli , Filetto I , Filetto II ; the stele statue of Montecurto has only one javelin that as for size could very well represent a large lance .

Only the stele statues of Lerici and Reusa , belonging to group C , have a handheld object resembling a disc that could represent a metal or stone throwing weapon with a cutting edge , or more probably a shield . Round shields date right back to the urn-field cultures or the beginning of Hallstatt ( from the end of the Bronze Age to the beginning of the Iron Age ) and appear with oval shields from the VII cen. b.C. onwards .
One or two metal discs , also called phalaere , were worn on the chest to protect vital parts of the body . They are well documented in all central-western Europe , especially in the areas north and south of the Alps .

Ornaments appear only on some of the female stele statues belonging to group B .
Choker : some of the stele statues of group B show a choker that resembles the many stranded bronze collars with the ends bent into an eyelet that may date back well into the first Bronze Age . The examples in Italy all come from a series of smithies in the area of the morainic lakes near Varese and Garda Lake ; in the rest of Europe they can be found in the Baden culture as far back as in the Eneolithic Age .
Necklace : the stele statues Filetto III and Filetto X have instead a one or two- string necklace that resembles the necklaces made of stone pebbles that have been found in caves dating to the beginning of the Eneolithic Age in northwestern Toscana , such as the Buca di Fondineto ( Massarosa , LU ) , the Castle  and the Hell caves at Vecchiano ( Pisa ) or the necklaces made of biconical beads of steatite , found in the Tana della Volpe at Equi .
Circles and cuplets : some of the oldest stele statues have two circles in relief or two cuplets at the sides of the face ; often these are in couples , are probably better read as representing earrings , hair combs or a headdress , rather than ears .

The Iron Age stele statues belonging to group C often have a wide belt – Bigliolo , Reusa , Filetto I , Campoli – the sword hangs from ; in one case ( Filetto II) it is a double belt . In some instances ( Reusa , Bigliolo , they also have a triangular hip-cloth . 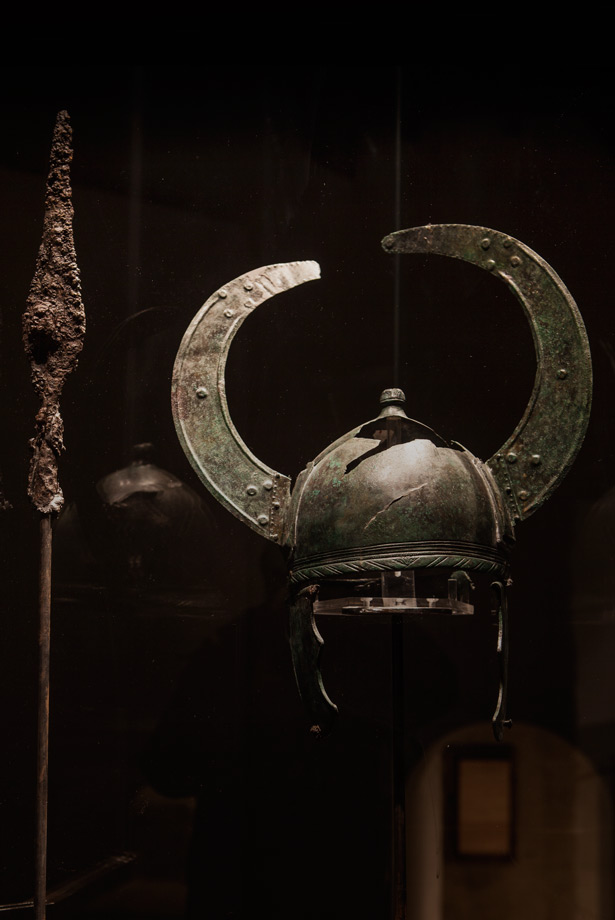 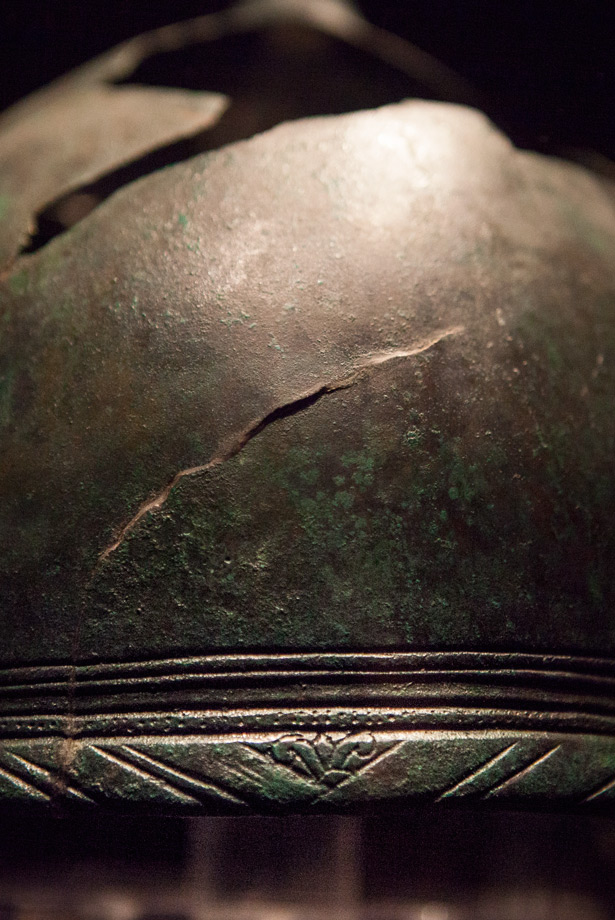