It is a male stele statue broken in two at elbow level and missing the bottom part and the lower left side . It was discoverd in 1968 , with other two , near the sanctuary of the Madonna del Soccorso at Minucciano ( Minucciano , LU ) when a parking area was being built . On discovery this statue was already broken in two at the elbow level . It belongs to group B and thanks to the results obtained through the stratigraphic excavation we have a reliable eneolithic dating ( between 3400/3300 and 2300/2000 b.C. ) . The body is trapezoidal with a rather long and wide rounded neck and a semicircular head .  The face is set off by a narrow circular ribbon with a vertical appendage representing the nose ; the eyes are very small and represented by two little holes at the top of the sides of the nose ; the collar-bone is shown as a two-piece motif  broken off in the middle ; the arms are slightly bent at the elbows . Against the chest there is an upright long-handled axe with a rectangular blade and a dagger handle is placed horizontally below the arms .
In 1971 a stratigraphic excavation of the area in which the stele statue had been discovered was carried out and the results then obtained have recently been reviewed .  What now appears as the most probable interpretation of the findings is that this stele statue was set up during the Eneolithic Age  as part of a small alignment of standing stones ( level IVb) . This arrangement has similarities to other sites dating to the same time ( Venelia II , Velturno in the Adige Valley , Aosta , Sion ) . Later on , presumably in the middle Bronze Age, the stele statue was knocked down : it was actually discovered lying horizontally in a different level ( level IV ) . The features represented on the stele statue , similar to those of monuments of the same group ( group B ) , would seem to confirm that this statue dates to the Eneolithic Age or at the latest to the beginning of the Bronze Age .
The stele statue is kept at the Pontremoli Museum , where there is also a copy . There are copies in the Museum of the Territory of the Upper Aulella Valley at Casola in Lunigiana , in the didactic area at Nibbiara ( Casola in Lunigiana ) on the square in front of the Sanctuary of the Madonna del Soccorso at Minucciano . 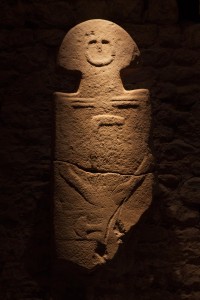