It is a male sandstone stele statue with the head missing . It was discovered in 1984 in a field at “San Martino basso “ near the village of Monti ( Licciana Nardi , MS ) . It belongs to group B and could therefore date back to the Eneolithic Age ( between 3400/3300 and 2300/2000 b.C. ).  The body is rectangular , with very little left of the quite thick neck , the collar-bone ribbon is narrow and in relief , the arms are curved , especially towards the end , the hands are shown by parallel lines . A dagger in low relief , obtained carving away the surrounding stone , is placed horizontally below the hands .  The blade is triangular and the handle has a semicircular knob .

Archeological excavation :
The  Venelia II archeological excavation was carried out in 1986-87 in all the field in which the stele statue had been found ; it was in a first level that had been disturbed and disrupted by ploughing and digging and where roman , medieval , renaissance and modern pottery shards were found . The findings in the area witness that the place was used in the eneolithic age , probably because of the monument itself, and that there was also an alignment of standing stones perhaps dating to the same period .
The stele statue is kept at the Pontremoli Museum . 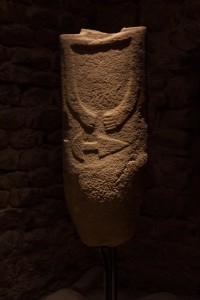